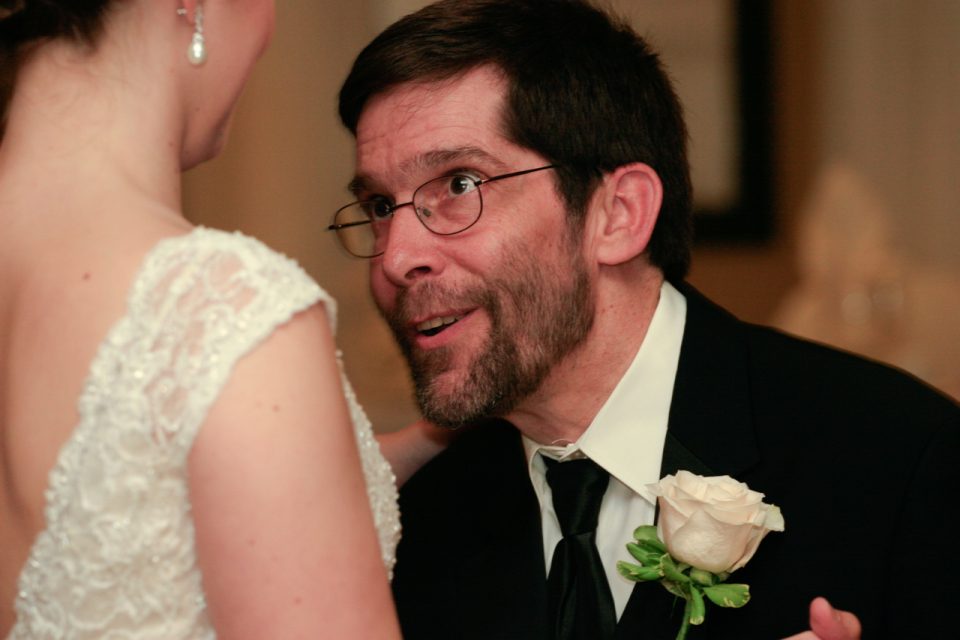 Where there is no vision, the people perish
Proverbs 29:18a (KJV)

You wouldn’t think it would be like this. I mean, I spent close to 50 hours and hundreds of dollars training to build up my strength and endurance. I practiced and choreographed. You’d think it would be a big deal. Yet, now that it’s over, I find it very difficult to watch the video of the Father-Daughter dance at my daughter’s wedding. Even writing this blog has eluded me for months.

It’s not that we were horrible (we probably were, but it doesn’t matter). I had no expectations of excellence. I only wanted to get through it in one piece, and to honor my daughter by making this day everything she wanted it to be. Actually, I think it came out pretty well. Several people cried, so that was a success (I take perverse pleasure at stimulating other people’s emotions, even if my own are stunted).

No, the thing I find difficult is that seeing myself in a mirror or on camera stimulates a cognitive dissonance; the man I see on the screen does not correspond to the image I have of myself. This simply is not whom I see myself to be. I have a vision of me that is strong and confident, a leader in the workplace, in the church, and in my home. I terrify young men who want to call upon my daughters (ok, this isn’t necessarily spiritual, but it brings me great pleasure). I fully embrace the identity I have in Christ as a child of the great king, redeemed by grace and empowered to be more than an overcomer in this life.

This man… this man is small, weak. and crippled. He can’t stand up straight and moves awkwardly. Who could ever take this man seriously, much less respect him?

I was discussing this with a friend of mine, a former Air Force and commercial pilot who was suddenly struck blind. He is another illustration of this point, in that his blindness does not define him. We all treat him as just another friend, including the necessary occasional blind joke. When I mentioned what I was thinking to him, he said, “what do you mean by you are crippled?” Because he’s never seen me, he only knows the man I project, the one who matches my inner identity.

I have other friends who are strong and capable, but are crippled by a wounded and broken self-image. You probably have friends like that too. I see their brokenness played out on the internet as they find affront and defeat in every situation and vent about the injustice of it all on Facebook or Twitter. Rather than believing and resting in the truth of what God says about them, they pay attention to the lies that play over and over in their heads: You aren’t smart enough. You aren’t pretty enough. No one likes you. You’ll never amount to anything.

I’d like to be all super-spiritual about this, and claim that my vision is solely about the strength of God working in me which is greater than the physical limitations of my disease. But there’s a darker side to my view of myself, and that is self-denial. I don’t want to be crippled and limited, so I pretend that I’m not, until the reality of my body is shoved in my face. Even now, I find myself stuck in middle school, where more than anything I don’t want to be “different”. But I think there must be an aspect of self-denial, not to be limited by my body, my fears, my past, or any other thing that would keep me from being or accomplishing what I have been called to. Yes, these things are all true, but there is a truth greater than them, that supersedes their effect on my life.

The Christian life is all about faith, seeing that which is not as if it is. We are told that we are forgiven of our sin, and that sin no longer has power over us. Yet in my experience, I still sin. We are told that we are joint heirs with Christ, and that every spiritual blessing necessary for life and godliness is ours. Yet so often I feel impoverished and powerless. And so we believe, that which is not yet manifest will someday come to pass. We have a great hope in a coming salvation.

There is a great mystery of the Christian faith. God’s power is demonstrated through my weakness. The fact that I can be who I believe myself to be when shackled to a broken and uncooperative body is a testimony to God’s power. Yes, I am weak, so if God can do anything through me, he must be very powerful indeed. In this, my weakness brings glory to God. So, like Paul, “I will boast all the more gladly about my weaknesses, so that Christ’s power may rest on me.” (2 Corinthians 12:9)

Vision matters. Who you see yourself to be will ultimately govern who you are. I can do all things through Christ who strengthens me. What about you?