Not only this, but we ourselves also, who have the firstfruits of the Spirit, groan inwardly as we eagerly await our adoption, the redemption of our bodies. For in hope we were saved. Now hope that is seen is not hope, because who hopes for what he sees? But if we hope for what we do not see, we eagerly wait for it with endurance.
Romans 8:23-25

The e-mail in my inbox was almost beyond belief. 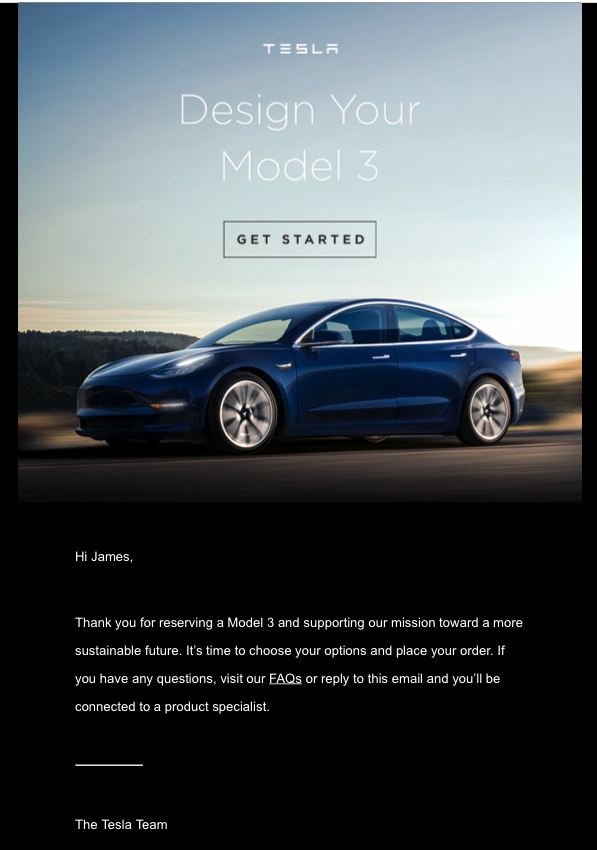 If you know me at all (or have been following my blog for a while) you know that I have hoped and longed and dreamed for the day when I would own a Tesla. It wasn’t a question of “if”, only “when”. We talked about the day I would have my dream car as if it were a certainty.

However, it had been years of waiting, and months of delays and slips “to the right”. While I knew of a certainty that one day I would own a Tesla, I had become comfortable in the future nature of it. Someday, I would own one. Someday. But not today.

Yet there it was. The promise of the promise becoming a reality. A sense of the surreal began to envelop me as I clicked on the link, and worked my way through the configurator (there really weren’t many choices… color, wheels, auto-pilot). I had used Tesla’s configuration tool countless times before, building a dream Model S. At the end, I would get the car just the way I wanted it, then see the price and say… “yeah, no. Never gonna happen. I’ll wait for the Model 3.”

To be sure, Elon Musk’s promise of a consumer ($35,000) car was not yet realized. Early adopters have the privilege of paying for certain mandatory upgrades (extended range battery, premium interior), adding another 57% to the “base” price of the vehicle. And enhanced auto pilot (EAP) adds another 17% (but you can’t have a Tesla without auto pilot). The price was a bit higher than I was hoping. And all-wheel-drive wasn’t (yet) an option.

As I finished the configuration, I found myself face to face with the most terrifying thing I’ve seen in recent memory: “Submit order”.

You need to understand that my personal theology (what is expressed in how I live my life, not just in my words) tends towards the ascetic. I am firmly rooted in the belief that this world is not my home; that I am a steward of God’s resources, and that all financial decisions are spiritual ones. I don’t have a problem being generous towards others, or giving my wife her dream. But spending money on myself is extremely difficult for me.

My wife wasn’t home at the time. As fear began to grip my heart, I questioned if this was the right thing to do. A quick check of the bank account showed (surprisingly) that there was enough money in savings to pay for the car in full. No need to move money around, sell investments, consolidate assets. It was right there. Nevertheless, it was a lot of money. For a car. Was I really going to do this? Surely God would not approve.

Many of you have no clue why I struggled with this. Perhaps it’s because such a thing is so far from your reality that it’s all hypothetical. Perhaps you are quite comfortable enjoying the pleasures of this life. Perhaps you are well versed in accepting God’s blessings as they come along. Whatever the reason, I want you to try to understand the depth of my self-doubt and fear.

This was a nice dream, but surely God has other plans for that money. You don’t need the car of your dreams; there are plenty of other ways to get from Point A to Point B. How can you be so selfish, indulging your pleasures like that? What would Jesus do?

No, maybe you can’t resonate with my angst. But I wonder, are there other dreams that you have become comfortable in just dreaming? You want the dream, to be sure, but it’s so far out of reach that you make peace with the “someday” aspect of it and relegate it to that somnolent part of your brain so it doesn’t clutter up the day-to-day realities.

As a believer in Jesus, is heaven such a dream for you? Your creed dictates that it is a future reality, but here on earth there is no time for that. There are kids to raise, and bills to pay, and real world problems to solve. Yes, a dream of someday, where there is no more sin, pain, and death; where every tear is wiped away; where we can be reunited with loved ones; and even being in the continual presence of God (whatever that means); such a dream would be nice. Sometime. Someday.

My story doesn’t end yet. When my wife got home, I showed her the configuration, told her the bottom line, and waited for her to confirm my fears. I completely expected her to agree with me that this was just unrealistic, and we should give up on this foolishness.

What? No second guessing? No hand-wringing? I tried to communicate my doubts, my fears. She looked at me like I’d lost my mind (probably they way you have been reading this). “You’ve waited for this; we can afford it. Do it.”

So I did. It took a few days for the shock to wear off, that I had actually ordered this car. After ordering, the web site said to expect 3-6 weeks for delivery. Nine days later I had my car.

The applications of this experience are numerous. Don’t let the future nature of a the Kingdom of God keep you from stepping in to the fullness of what he has for you today. Heaven is not just pie in the sky, by and by. Jesus said that he came that we might have life, and that more abundantly. The promise is for today, if you will enter in.

I bought this car, sight unseen. I’d never laid eyes on a Model 3, much less driven one, before I took delivery. People who have never driven a Tesla don’t understand what the appeal is. It’s like trying to explain “purple” to a blind man. Or as Chris Rice put it, it’s like trying to smell the color 9. If you don’t know the love of God expressed through the forgiveness of your sins through the atoning death of Jesus, I urge you to believe those of us who have gone before.. it is so worth it.

Short of buying a house, I’ve never spent so much money on anything. God offers you to accept on faith that eternal life is so much greater than anything you have ever known that it is worth everything. In the parable of the pearl of great price, the merchant sells everything he has in order to possess it. Jesus said, what does it profit a man if he gains the whole world, and loses his soul? Heaven, eternal life, new life in Christ is worth whatever you are holding on to, whatever is keeping you from entering in to whatever God has for you.

Once I took the leap, things happened much quicker than I thought. Heaven is closer than you think. No one knows the number of their days. Don’t put off being reconciled to God. You may think you have time, but sometimes things move fast. There is no time like the present.

Don’t let your hope wane. While I was convinced that I would someday own a Tesla, I had stopped anticipating it. We should live in the eager anticipation of the coming promise of the Kingdom of God. Don’t let your love grow cold; don’t let the cares of this life choke out the fruitfulness of the word planted in you. Don’t give up on God. Someday is sooner than you think.