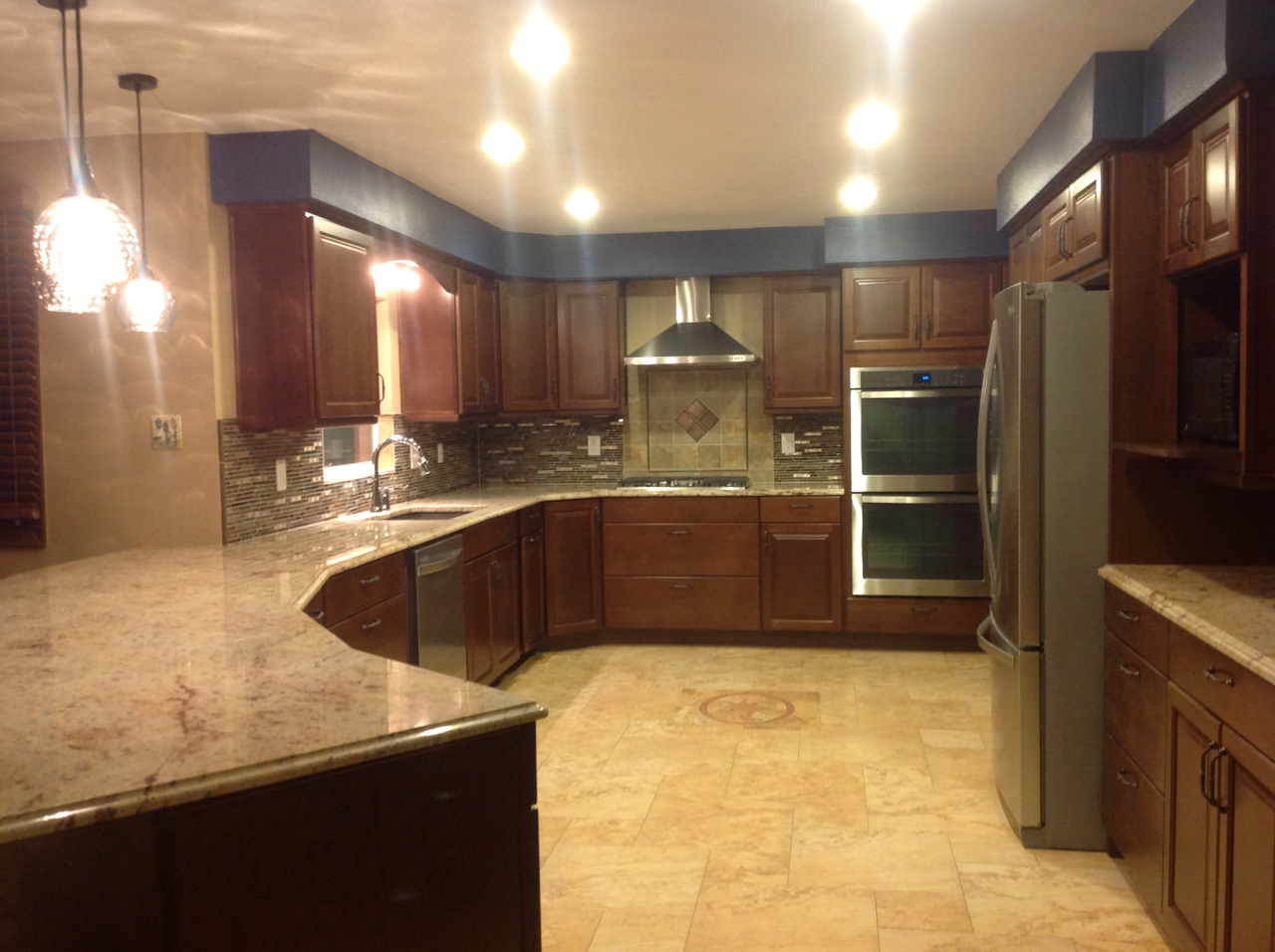 We’ve just completed our latest insanity, a kitchen remodel. Several years ago, when we ripped off the back of our house and added a two-story addition, my wife found a cartoon of a man at the entrance to hell. The devil is showing him two doors, labeled “Eternal Fire and Brimstone” and “Living through a remodel”. The man says, “It’s pretty much a toss up”. That’s how we feel about home renovations. Yet we keep doing them.

This remodel has been particularly difficult. It’s hard to imagine just how central your kitchen is to your home’s functioning until yours is gutted and your basement looks like a bad garage sale, with dishes, pots and random food articles strewn about. My wife had grand visions of grilling out every day, or using the crock pot or the George Foreman grill. The reality is that we have been living off frozen dinners and delivered pizza for the past month.

The disorientation of having people in your house, making messes and noises every day is hard to imagine. I’m hopeful that my wife never wants to make another trip to Lowes, since she’s been such a fixture there that they are about to give her a reserved parking spot. I think one day she went 3 times before noon. My poor dog knows he’s supposed to bark at strangers, but isn’t sure what a stranger is anymore.

There were times when I wasn’t sure my wife would be able to hold it together. From the days when no work was done (despite being told that someone would be there), to the things that weren’t done right the first time, to the things that we were pretty sure should have been done sooner, it has been a challenge to remind myself that only the finished product matters. I think of the saying that “people who love sausage and respect the law should never watch either one being made.” I think home improvement projects might also fall into that category.

Now the invasion is complete. The result is stunning, and more than we ever dreamed of. All of my wife’s ambitions have been realized and both she and my daughter are eagerly awaiting many years of culinary conquests. Tomorrow I will give our contractor the final payment and we will close that chapter of our lives. When I posted the picture of the completed kitchen on my Facebook page, my caption read, “It. Is. Finished.”

But as I reflect on the verse that inspired me, I realize there is so much more than just a pithy quote to conclude a monumental project. The Greek word translated “it is finished” speaks of a completion of accomplishment, or a fulfillment of purpose. Despite the cinematic portrayals of Christ on the cross gasping out each syllable, I rather suspect this this was a triumphal cry. Jesus wasn’t just quietly marking the cessation of his suffering on the cross. He was celebrating the beginning of something new.

In other words, when Jesus said “it is finished”, he basically said “I’ve done everything there is to do.” He closed the door on all of his working. Just as in Genesis when God completed the work of creation and rested, in Hebrews it says, “But when this priest had offered for all time one sacrifice for sins, he sat down at the right hand of God.”

Historically, this word, or some abbreviation of it, was written across a bill that had been paid in full, indicating that no further obligation remained. In other words, Jesus wrote across the bill of our debt from sin “it is finished” (paid in full). I’ve written it on my last check to the contractor.

My family is very excited that this remodel is done, not just because it was a pain that we had to endure, but because the result is amazing. It is beautiful, and more functional than what we had before. It will bring joy to our lives and help us to entertain and fulfill the purposes we have for our house.

So, when Jesus said, “it is finished”, he wasn’t just declaring an end to his work and suffering. He was celebrating the result that is amazing. Because of his finished work, we now have the right to become sons of God; to be translated from the kingdom of darkness into the kingdom of light. It brings joy to God’s heart for sinners to be redeemed, and to be able to walk in the purposes he has for them.

One final thought. My contractor won’t be working on my house tomorrow, because “it is finished”. Are you still trying to work your way into God’s favor? It isn’t necessary. It is finished.